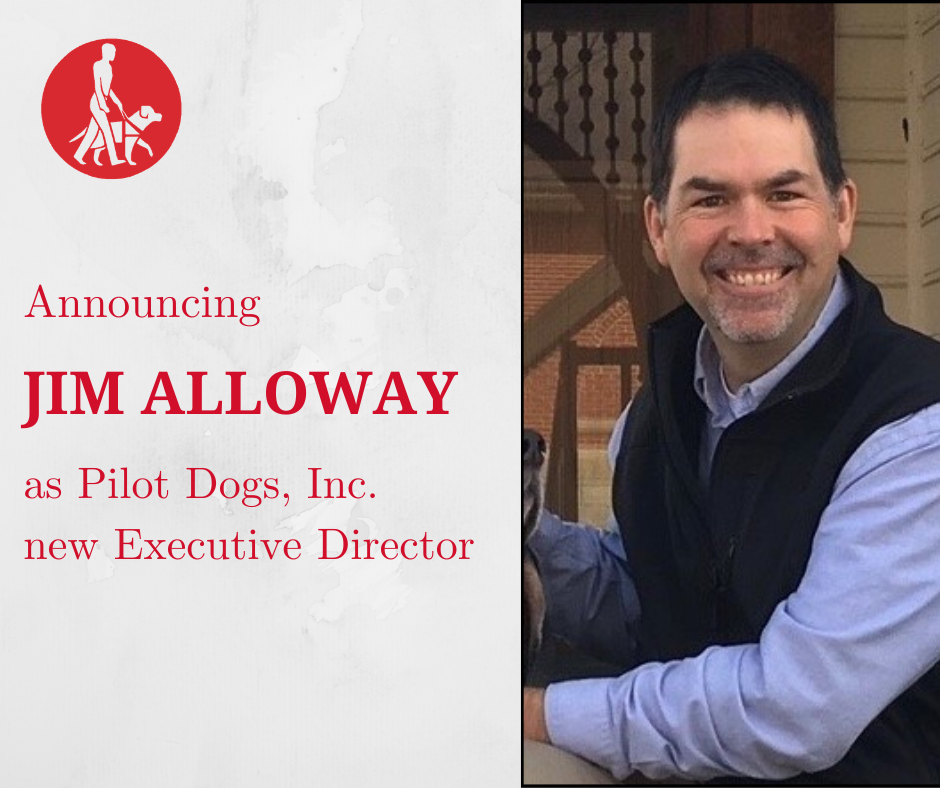 The Board of Directors of Pilot Dogs, Inc. is pleased to announce the selection of Jim Alloway as its new Executive Director, following an extensive search conducted by Benefactor Group. A leader with a deep understanding of nonprofit management, canine welfare and service to the community, Alloway has the expertise to guide Pilot Dogs in its next chapter.

“Jim’s expertise and experience puts Pilot Dogs in a great position to build upon the foundation of serving the blind established by Executive Director, Jay Gray,” said Melissa Black, President of the Board. “As Jay nears his retirement, and we reflect on his over 41 years of dedicated service to Pilot Dogs, we believe Jim is the perfect bridge to lead us into what promises to be a bright future for the organization.”

Alloway joins the Pilot Dogs community after spending the last five years as Executive Director of the Union County Humane Society, an organization responsible for the care and placement of over 1,200 animals annually. During his tenure at the Humane Society, Alloway doubled animal intake and adoption outcomes; measurably improved the quality of animals’ nutrition, medical care, training, and wellness; revitalized essential processes, procedures, and systems; and led the organization to hit its ten-year financial goal in under six years.

As the former President of the United Schutzhund Clubs of America, an international membership organization dedicated to preserving the German Shepherd Dog’s working heritage, Alloway successfully increased membership by 8% over two years, halting a six-year membership decline. He also restructured the organizational structure and board function to improve processes and governance.

Jim not only brings critical strategic and executive leadership skills to Pilot Dogs, but also deep values of integrity and a passion for the organization’s mission. “It’s humbling and a privilege for me to be a part of an organization with such a noble mission and rich history of helping people,” said Alloway. “I am honored to be a part of this team that has such great enthusiasm for its truly incredible mission.”

In his position as Pilot Dogs’ Executive Director, Alloway will serve as the organization’s key representative, articulating the value of its work to a wide range of audiences while fostering enthusiasm for the mission across Pilot Dogs’ corps of supporters and volunteers. Under his guidance, the organization will grow to touch even more lives and thrive for decades to come.

After serving Pilot Dogs for over 41 years, nearly 30 years as Executive Director, Jay Gray is looking ahead to his retirement in July but will remain an active supporter of the organization. “I will miss the interaction with the students and the public that I enjoyed as Executive Director,” said Gray. “I am looking forward to continuing my support of this organization that has meant so much to me and supporting Jim in this new role.”